What a great experience to accompany some young scientists from our school to compete with others in Bandung. We flew on Monday afternoon from east campus with Mr. Kuncoro, Physic Teacher from west campus. We need to use a cab since school’s car from west campus needs to bring a water dispenser on their way back to west. The flight with Merpati was really smooth. I have discussion with Michelle while we’re in the aircraft, about predicted questions from the judges and also learning some algorithm and scripting code. Arriving in Bandung, we need 3 Taxi to go to Hotel Kartika, the hotel that we will stay while we’re in Bandung. Almost 8.30pm when we arrived at hotel. Harman has contacted his friend which we know later on, his name was Dion, an alumni from the last ICYS. He recommended us to have a dinner at Cafe Bali, not too faraway from our hotel. Unfortunately, the ‘all you can eat’ option was not available so we need to have our main course 🙁

After having our dinner, we returned to hotel and we found out that a lot of YSC 2013 participants from other high schools has used the same hotel as ours. It was really good to see the students gathered in one place and preparing for the competition next day. Thanks God, we managed to have a good rest for the first night we stay in Bandung.

When the clock showed 5am, it was really good to see that the students has woke up and get ready to have their breakfast. We ate fried rice and around 6.30 we walked to PUDAK Office, just around the corner of our hotel. We need to register ourselves and had small chat with other participants. We went to PUDAK Factory, which is quite far from its office, took probably 45 minutes to get there. We have prepared our posters, contains our research and put on the designated location. It’s 10 o’clock when the competition began. It was really crowded with all the students and their teachers, including the judges and the committees which were walking around to see all the posters. Here’s the poster of POW! (Puzzle of Wayang) Poster that I have taken with my Android. 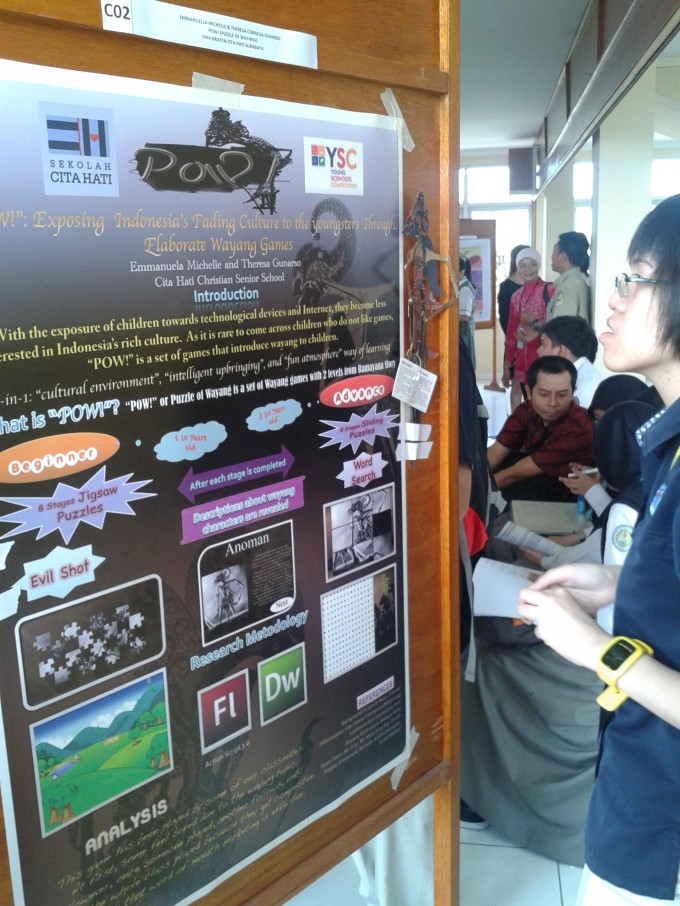 We are having our lunch at 12.30pm and continue with factory visit. In here, we couldn’t take a picture according to PUDAK Regulation. There were so many tools or heavy machine that seemed really dangerous to use with. We need to be careful on each building that we entered. The journey took almost two hours before we returned back to the Poster’s exhibition room. It was raining when the committees announce the participants who can go to the final round. Unfortunately, my computer science students didn’t make it. They even have their own plan for the next day, which is fortunately changed after we go back to the hotel. After the announcement, we headed back to the hotel directly and the boys who successfully go to the final round, seemed enthusiastically practice and practice their presentation until midnight! (What a great spirit!!!) But before that, we have our satay time together 🙂 There was a good satay warung in front of our hotel and they really have a delicious satay 🙂

The final round for the next day, we went to PUDAK Office and brought by bus to the factory, same as yesterday. The competition got tighter and the pressure was getting higher. All the presentations was running well with our students. Here’s some of their pictures while they’re ‘fighting’ with the judges 🙂 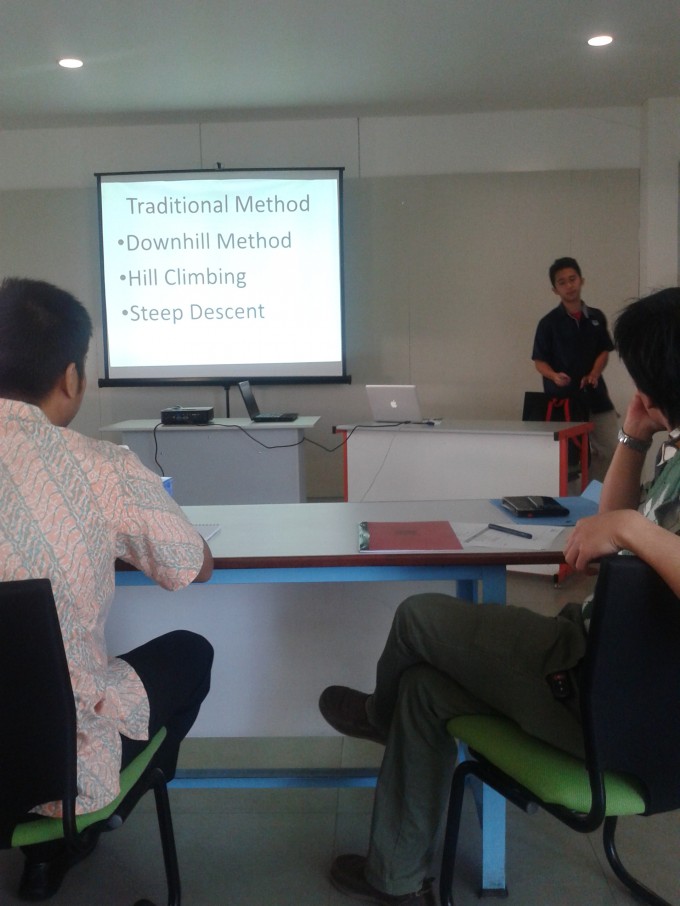 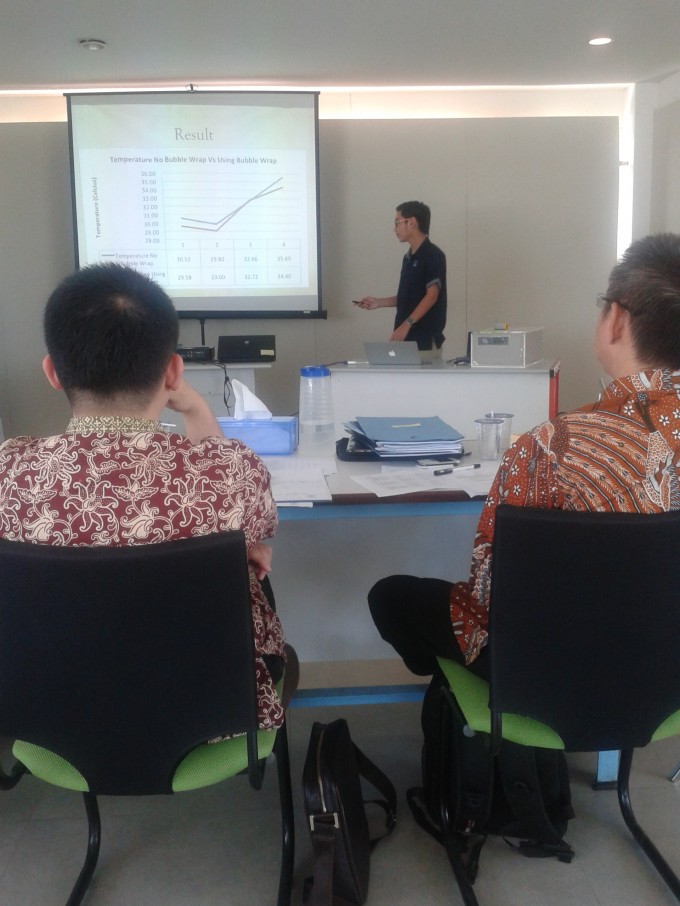 As a result of the final round, Harman got the silver medal, while Clark and Josiah got bronze medal each. It was a tough competition, but thanks to God that they made it to fight until the end and became winners for their school 🙂 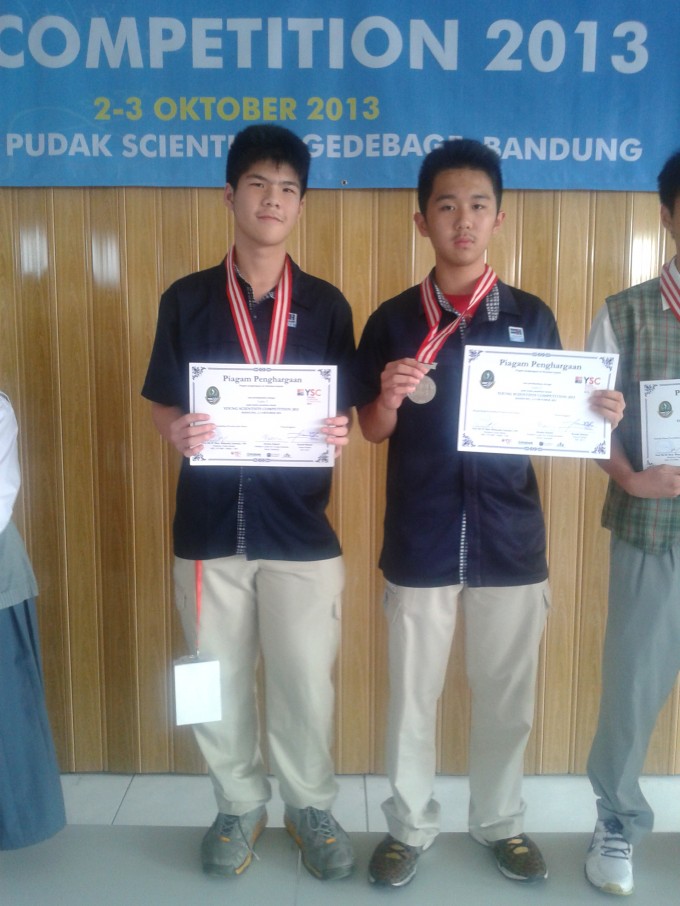 CONGRATULATIONS to the winner and they will fight again in Yogyakarta next month.